skip to main | skip to sidebar

The Way it is

Hyper connected leads to loss of soul because you'd have a panic attack if you tried to sit still for a second. What's that about?

Hop on the fear bandwagon. Everyone else does. One day it's terrorists threatening our way of life, and the environment which will be officially closed by the year 2012, thank you Al Gore.

Meanwhile we've got troops we don't even care about no matter how much we say we do.

And guess what? We're still here. But without us, trust me, the world would still turn. No matter how important we like to think we are with our fancy titles and jobs, and crackberrys, and blue teeth that make us look like complete assholes. Really. You look so fucking needy and stupid with that thing in your ear. Can't be alone for 5 minutes, can you? What's that all about?

the self worth is lacking and we wouldn't want to take the time to figure out how to get some. Come to some inner truth or truths and start playing a part in whatever the hell this is we're creating. And if you're not creating...Stop. Look around you, everyone is running around at such a speed (Beatles). Do you think this imbalance is going to be good for our future?

We've caught a case of the fears, peeps.

Don't be scared. There is a purpose, it's just that we'll probably never know what the hell it is. Trust. Create. Enjoy. There will be no second chances.
Sent via BlackBerry from T-Mobile
Posted by Chief Guy at 6:39 PM No comments:

We are so not blah-blah-blahgging here much any more. But we are doing plenty of ranting and raving at our website. You can also follow us on our very fun Twitter feed.
Posted by Chief Guy at 9:04 PM No comments:

Is It Just Me?

Or does Archie Manning look like Woody Allen's younger brother? Good news: Manning does not have an Asian baby sitter.

Check out the new site: www.theguyreport.com
Sent via BlackBerry from T-Mobile

Hey, Kids! We're blogging about the Olympics over at the new site. C'mon over and leave this old lady behind!
Posted by Chief Guy at 8:42 PM No comments: 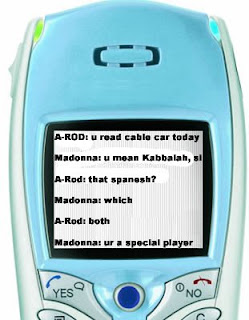 Read the rest of the messages straight from the source.

Our entire schpiel has permanently moved over to our website at www.theguyreport.com. Join us there and make sure to register to keep up to date. Hasta la vista.
Posted by Chief Guy at 11:19 AM No comments:

Did You Happen to See the Most Beautiful Girl?

OK, you recognize the lyrics. If you don't, Charlie Rich sung it. It's an old-school, cheesy kind of tune. But our Chief Guy just used the musical accompaniment in a pick-up attempt. Was he successful?

That's not the point right now. The point, is how to use creativity to enhance your pick-up skills. Because you've been using the cheesy, rehearsed lines for too long. It's time to let a little improvisation in on your act...

Walking through the grocery store, C.G. saw her standing there. (She might not have been the Most Beautiful Girl in the World, but she was certainly the MBGIS. Most Beautiful Girl in Store, and then some.) He quickly decided against the usual guy approach.* She was too sexy for that. Either he had to Go Big, or Go Home.

That's when Charlie Rich came in, his song piped in over the loud speakers. Why not? C.G. figured. He had nothing to lose.

He marched right over to her aisle and asked her if she was listening to the song. "Um, yes, dumbass, I'm not deaf."

She didn't say that. She smiled, yes, she was listening, even though it was apparent her young-school self found it rather cheesy. But that cheese-factor quickly vanished when C.G. spun it into flattery.

He told her she was the Most Beautiful Girl in the World and he wanted to go out with her. She blushed, thanked him, and said "maybe."

Once again, her answer isn't the thing here. The thing is to use the anecdote as an example of how to use your environment and surroundings to go with the creative flow. If you can spin gems like that, you will be rewarded one day. Even if she's not MBGW material.

As it happens, the song is all about break-up, which C.G. would be perfectly willing to do if the Most Beautiful Girl in the World would just go out with him once. Stay tuned.

* Ya know, pretend you just happen to need something on the aisle she is standing in. Then proceed to aisle, buy a bunch of sh*t you don't need, and still drop the ball on talking to her.

Chief Guy
Has written for over 30 publications including Playboy, L.A. Times, Los Angeles Magazine, ESPN, and The Guy Report website.

Add to your Yahoo page